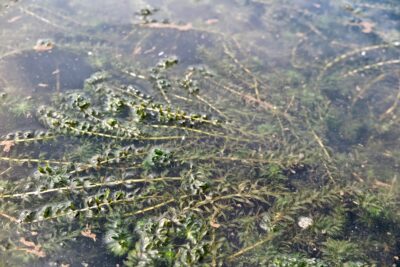 The presence and proliferation of aquatic invasive, non-native plants in the Connecticut River and other water bodies throughout the region and state has become an ever increasing issue. Non-native aquatic plants in the state have been identified for decades.  In many cases, the invasive plants take over and replace the native plants that are so important to the ecology of our waters.  At present RiverCOG’s efforts predominantly involve Hydrilla and Water Chestnut (Trapa natans).

Our work on Hydrilla began in 2018 with participation on a collaborative surveying initiative with the Connecticut Agricultural Experiment Station (CAES) and the Northeast Aquatic Nuisance Species Panel.

Hydrilla will be an on going project as it has spread prolifically throughout the Connecticut River from Agawam, Massachusetts to Essex, Connecticut including the River’s many coves and fresh water tidal creeks and wetlands. Preventing spread from these areas to Connecticut’s and New England’s other waterbodies will be a critical component of our work. Promoting Connecticut’s (as well as other states) Clean, Drain, and Dry Program is critical for success.

Since 2011 Water Chestnut’s presence has been held at bay to the south of  Middletown and Portland in the Connecticut River due to early detection and intervention of RiverCOG and numerous other partners, including the Connecticut Dept. of Energy and Environmental Protection (Ct DEEP), US Fish and Wildlife, Connecticut Sea Grant, and the Friends of Whalebone Cove. The Mattabassett (the floating meadows) between Cromwell and Middletown still remains an area of serious concern despite the hard work of the Jonah Center and the Connecticut River Conservancy and their many diligent and hardworking volunteers. Water Chestnut is easily controlled if gotten in its infancy, once established it can be eradicated but it can take years of concentrated diligent effort.

In the summer of 2019, a river survey of the waters of the lower Connecticut River, a 12 Connecticut River town Connecticut Resource, Conservation, and Development (Ct RC&D) Environmental Review Team (ERT) project identified hydrilla and other invasives plants. The survey was conducted by a team of stakeholders including the Ct RC&D, RiverCOG, the Connecticut Agricultural Experiment Station (CAES), the Connecticut River Gateway Commission and the Eight Mile River Wild & Scenic organization.

North America Invasive Species Management Council Webinar – Dr Robert Richardson – University of North Carolina –  If you can’t watch this whole video the last 20 minutes are the most important as it concerns Hydrilla.

Hydrilla in the floating meadows of the Mattabassett River between Middletown and Cromwell. Photo: M. Burns